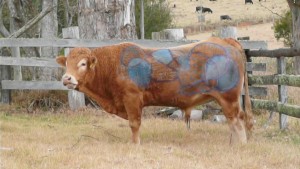 ARTIST STATEMENT
My practice explores the absurdities that arise when combining my rural Australian heritage with urban based contemporary art. A major part of this investigation is the relation between humans and animals. My process incorporates video documentation of animal behaviour on the farm and sometimes setting up absurd situations for the animals. I often find that  the domestic animals I use are uninterested in what the human describes as absurd. Instead their curiosity is sparked by human behaviour and in return their behaviour sparks human curiosity.   For example in the video “Cud” ( http://www.youtube.com/watch?v=tTYAYxTQRZU) the bull is less interested in what has been painted on its side, rather he is more concerned with activities beyond and behind the camera, all the while he continues with the normal bull behaviour of chewing cud. In contrast to this video is ” Cows licking motorbike” ( http://www.youtube.com/watch?v=fgm-yOQc7XI ) here the motor bike has sparked the cattle’s curiosity.

THE ARTIST
Sally Chicken is originally from the rural town of Coonamble in NSW, Australia since then Chicken has lived, studied and exhibited art in a range of towns and cities across eastern Australia. This has not always been an easy road especially in 2009 when Chicken was diagnosed Leukaemia. Chicken in now in remission and is currently studying Honours in Fine Art at Queensland University of Technology, researching the relationship between rural and urban in contemporary art. Chicken has a Bachelor in Fine Art, majoring in Visual Art.