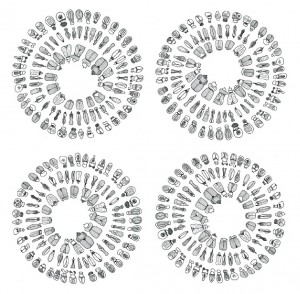 Part of a body of work produced during a month at Wolfson College, Oxford University in 2010, coinciding with the exhibition ‘Inordinate Fondness’ at Wolfson. The insects illustrated form part of the Hope insect collection, Oxford.

ARTIST STATEMENT
The title for this exhibition references the famous, if apocryphal, quote of J.B.S. Haldane.  When asked what he had learned about the nature of god through his work in biology, Haldane is quoted as saying that ‘God must have an inordinate fondness of beetles … and stars.’ This phrase is appropriate for several reasons. Wolfson College is built on the former home of the Haldane family.  His father, John Scott Haldane, was from Edinburgh and a fellow of New College Oxford.

In this work the formal way of presenting museum collections of fauna is examined. The normal specimen case that is read from left to right is redesigned as circles of species,

In some ways Haldane was making a statement about the sheer diversity of life.  A celebration of biodiversity is the leit motif of both the exhibition at Oxford and the subsequent artworks produced.

Hamer Dodds is an artist and scientist. He received a Masters degree in Biochemistry from London University and is a Master of Fine Art (Edinburgh College of Art). He qualified as a teacher at Bristol University.

He has exhibited work in the UK, mainland Europe and the USA and illustrated scientific books.

Recent works are concerned with the relationships between phylogeny and biodiversity. Hamer is working with scientists from The Universities of St Andrews and Edinburgh on aspects of biodiversity.

The work is grounded in the simple practise of observation, a skill important, if not fundamental, to art and science alike. The drawing in a majority of my work is contiguous. This is important as in a real way there are no discrete ecosystems or even species.

The viewer is often asked to consider the many relationships that exist between the organisms presented in the drawings exhibited, be they aesthetic, scientific or philosophical.

All the types of biota drawn have been directly observed in the field, working alongside scientists or from museum specimens.

The organisms are identified scientifically, keyed out wherever possible. The scale and the particular relationships between various organisms are quite often been altered to convey the methodologies used in the investigation.