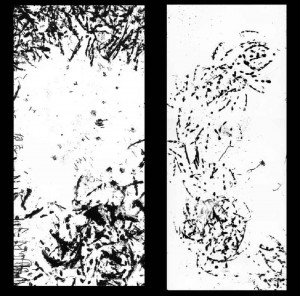 ARTIST STATEMENT
Tracing Animals
Using baits, I attracted animals to walk across a soot-covered plate of glass – or a white sheet of paper with a colour threshold. Any movement was imprinted on the surface, making the choreography visible. The animals themselves remained invisible but their movement was documented step by step – thus giving us clues as to the size, rhythm and direction of the passers-by.

THE ARTIST
Tuula Närhinen (b. 1967) is visual artist based in Helsinki, Finland.
“Images derived from scientific investigation are the core of Närhinen’s art, along with a dry sense of humor. She is an investigative artist, inventive and methodical. Her works are installations that consist of series of photographs, drawings or sculptures. She has built cameras that produce images of what she imagines the world looks to a fly or a bear, developed methods for letting trees trace the shape of wind on their branches, and found techniques for using cold winter air to create patterns on paper and glass. Homemade instruments and a documentation of the working method are important elements of her works. Her topics are landscape, natural phenomena and environmental issues.” writes Paul Kahn in NEWmagazine.