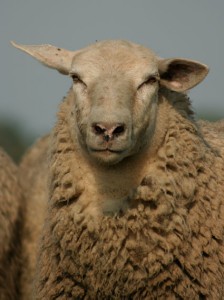 The Memory of Sheep, series of 50 photographs each 30x40cm

K.M. Kendrick et al (Babraham Institute, UK) demonstrated that individual sheep can remember 50 other sheep faces for over 2 years, and that the specialised neural circuits involved maintain selective encoding of individual sheep faces even after long periods of separation. Based on these findings I made a portrait series of 50 individual sheep using the “human” portrait format as opposed to horizontal/landscape format generally used for representing animals. The series has also been made into a book where the photographs of sheep are interspersed by a number of blank pages. These represent the unremembered or forgotten members of the herd.

Lucy Powell studied Fine Art in Liverpool and has lived and worked in Berlin since 1995. For many years she has made concept-driven work that addresses various aspects of the anthropomorphic gaze in a broad range of media. Recent animal-based exibitions include “Derridas Katze” in Berlin’s Künstlerhaus Bethanien, “Animal Kingdom” in the Schinkel Pavillon, Berlin and the “Shooting Animals” screening at this year’s International Short Film Festival, Oberhausen. She has recently formed an art-science salon group to facilitate cooperations between the two worlds that is Berlin-based with an international reach.