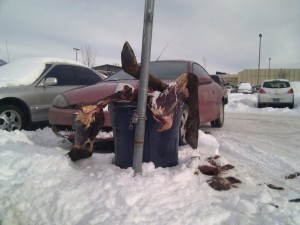 the flayed horse [human-animal relations in the american west]

The flayed horse is a blog presenting a narrative investigation into the social, cultural and mythical relationships between humans and animals in the American West created by artist and filmmaker Roz Mortimer. Usually based in the UK, Roz is currently Visiting Professor at Montana State University – this blog coincides with her time there between January and June 2011.

How it all started: “In October 2010 I was in two minds whether to go or not. And then he sent me this photograph. A flayed horse had been left in the waste bin of the car park opposite his office. That morning I called the airline and bought a ticket.”

The photograph led me to this place, and once here I was struck by the remarkably diverse ways that people here relate to animals. From the captive bear fed marshmallows on stick by children, to the published standard of perfection for breeding show bunnies, to the proud young men riding bucking bulls and the debris of animal parts discarded by hunters. It felt alien and as an outsider I felt compelled to comment.

Roz Mortimer is an artist and filmmaker who lives and works in London and Montana. Since 1993 she has been producing both short and longform artists film which have been widely screened around the world at film festivals, galleries, cinemas and on television. Her work has been supported by Arts Council England, British Council, Rockefeller Foundation, Wellcome Trust, Film London, LFVDA, LAFVA, Eastern Arts and Channel 4 Television.

Film and video works include Passages, Invisible, Tales from the Arctic Circle, Safety Tips For Kids, Gender Trouble, Dog of My Dreams, Neverland, Airshow, Wormcharmer, The Making of Finland in Three Movements, Bloodsports For Girls.

Her current work is focused on expanded and experimental forms of documentary across a range of media; from film and video to photography, sound, installation, performance and sculpture. Earlier works unpicked notions of Englishness, whereas more recent films have focused on specific global locations from the High Arctic to the Italian Lakes, creating layered and thought provoking portraits which blur the boundaries between staged theatre and documentary whilst challenging our social and political understanding of the world today.

You can find details of Roz’s work including her award winning films Dog of My Dreams and Wormcharmer at www.wonder-dog.co.uk – two films that take a subversive look at human-animal relationships.