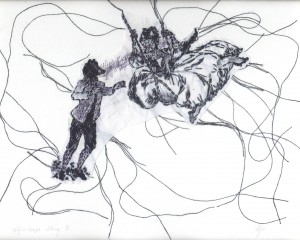 Currently my research and art practice is concerned with the notion of the animal-autobiography (the anthropocentric expression of self through allegorical animal narrative). This idea is a building block in the emerging cultural field of animal theory; a discourse nascent in post modernity’s concern with revisiting and redressing the histories of the ‘other’. Philosophically and materially animals have long been the most estranged and disempowered creatures on earth. Indeed the Aristotelian and Cartesian theses have proposed animals as little more than automata.[1] This derisive philosophy has embedded itself in the vast majority of cultural practices and has erased the agency of non human creatures. In the words of Heidegger animals are ‘poor in the world’.[2]  Here the philosopher is not empathising with animals but pointing to the linguistic poverty of non – human creatures in a logo – centric world.

Derrida in a counter assault to this humanist position has pointed out that the domination of animals is encoded into the very structure of language; that in naming non human creatures, animals and prizing language as the keystone of our domination of the natural world we have created the animetaphor. [3]  This is a state whereby the mythologies and prejudice surrounding non human creatures overpower, distort and diminish their presence. It is important to note here that this state of complete alienation is not purely textual but is also embedded in visual signs. Put plainly when looking at a representation of an animal it is seldom the creature that stands alone as a sign of itself. Particularly in art and its historical discourse animals are indexical signifiers attaching affect or moral allegory to the humans they accompany or merely allegorical substitutes for virtue or vice.

The exhibition Wolf in Sheep’s Clothing (2012) explores the broad and infinite terrain of the animetaphor/animal autobiography staking its claim somewhere between a position that deplores the subsumption of the animal into the service of human narrative and indeed utility; while simultaneously revealing an inescapable story telling impulse. This liminal position is exercised through personal and broad cultural reflection. As I tend to work compulsively between a variety of media, artworks for this exhibition are executed in a range of media including oil painting, embroidery drawings, ceramics and video stop frame animation.

Ann-Marie Tully obtained her Master of Fine Arts degree at the University of the Witwatersrand in 2003 and currently lectures in Cinematography and Film studies at the Wits School of Art, Film and TV division. Prior to this Ann-Marie held the position of Critical Studies lecturer at the Greenside Design Centre in Johannesburg. She has also worked extensively in the South African film industry as a cinematographer. As a visual artist, Ann-Marie exhibits regularly and is represented in local and international collections. Her current art and theoretical output is concerned with the action of anthropocentric metaphor in animal representation.