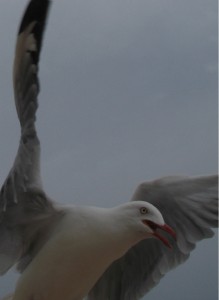 Sandwiched between city and ocean, the urban beach becomes a de facto buffer zone between ‘nature’ and humanity.

Whilst undomesticated, the urban seagull is one of a large number of animals that have adapted seemingly well to this liminal existence. Wheeling freely out to sea, yet converging instantly on any abandoned chip packet or spilt ice cream, these birds embody the complex, tense and problematic communication between humanity and the ‘natural’ world.

Shot from within an elevated bag of chips, the footage documents seagulls hovering and swooping to snatch them.

Seen as if through a window which itself appears to hover in space, the gulls repeatedly swoop towards the viewer and wheel away. Lured by easy ‘prey’, they seem uncomfortably locked into a tense, endless cycle of approach and flight.

Born in Lancashire, UK, Helen Sturgess lives and works in Sydney, Australia. She is a past finalist in the prestigious Helen Lempriere Travelling Art Scholarship (2003), and has exhibited in Bulgaria, Croatia, Greece and Germany as well as in Australia. She holds a Masters in Visual Arts (Sculpture, Performance and Installation) from Sydney College of the Arts, University of Sydney (2008), where she was awarded a number of scholarships and awards. She also received an Ian Potter Cultural Trust Grant in 2004, and often works with industry sponsorship to achieve her projects.

Helen’s work explores a number of themes, including: the fundamental interdependency of human existence; the mind/body relationship; how the human body locates itself in space; the lived experience of being both mother and artist, in particular the emotions and mind-states evoked; and re-presentations of half-remembered early experiences and sensations, unearthed whilst watching her daughter navigate her own childhood.  These partial memories, bringing forgotten fragments of her early years into clearer focus, underline for the artist the fleeting nature of childhood, and thus also the ultimately transient nature of life itself.