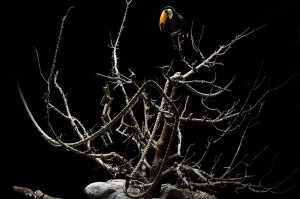 Toucan, from  the series Caged, was developed in response to the way we use animals for entertainment and decoration. Primarily developed around the subject of animals in captivity, the work has been designed to raise questions about our relationship to animals through recognizing their sentience, or capacity to feel.

Too often as human beings our reading of others is focused on our differences rather than our similarities. The project has been designed to challenge our moral boundaries by drawing on recognizable human emotions and traits using photography and time-lapse animation.

Kelly Hussey-Smith is a Documentary Practitioner mainly working in photography and more recently in video and multimedia. She lives and works in Brisbane, Australia. Kelly is currently undertaking a PhD at The Queensland College of Art, and is working on a long-term project investigating how we use animals as entertainment and decoration in our everyday lives.

Kelly holds a bachelor of Photography with Honours from the Queensland College of Art, Griffith University. In 2010 Kelly was the overall winner of the Churchie National Emerging Art Award and was selected for the Institute of Modern Art’s 2010 Fresh Cut show. Her work has been exhibited in Australia, China, and Bangladesh.

Kelly volunteers with Operation Smile and has traveled with the medical teams to India (2010), East Timor (2008) and Papua New Guinea (2008). In 2009 Kelly was lucky enough to receive a Tom Burns Scholarship that allowed her to work on a research project in China for two months investigating the role of women in Urban centres.

In 2007-08 Kelly was the Editor of the Australian PhotoJournalist Magazine and has more recently been involved with the Centre for Documentary Practice. The CDP aims to facilitate a dialogue between documentary practitioners in Australia and abroad.

Her research interests include Documentary Practice, the Politics of Aesthetics, Gender and Medicalisation, and Animal Rights.