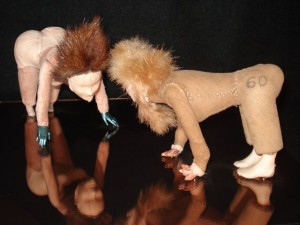 My work is informed by an ongoing interest in mythological hybrid creatures and also real life biological mutations. Throughout the ages artists have used these creatures to reflect social and moral dilemmas.Representing the flaws of creation which needed to be appeased , worshipped or destroyed they have been variously the subjects of fear, wonder, affection, acceptability  and rejection in myths, liturgies and social history.

My recent practice involves the gathering of mass-produced cast-off plastic toys and objects and also pre-loved leather garments and gloves. The manufacture and shelf-life of plastic toys is short though complex, but, in contrast,  leather is a product in which an animal product is converted, by a simple technological process, into durable luxury objects which are valued and retained.

I have been interested to see if an amalgamation of the two materials and sets of objects can be used to create small new objects and creatures which are given a third skin and a second life, one which transcends and acknowledges both sources: the mass-produced object destined for landfill  attains the qualities of the treasured and collected one.

By de- and re-constructing the toy parts and carefully cutting and stitching soft new skins around them, I create a bestiary of magical,  communicative creatures occupying a dark new world.

Anna Griffiths works in a variety of media to express ideas about ecology, human and animal biology and how societies interpret them. Her mostly three dimensional works are small and finely detailed, drawing on craft techniques  and de- and reconstruction of cast off materials and objects. Ambiguous and mysterious, they suggest other times or mythical places occupied by creatures and objects familiar to us but distorted.

As well as solo and group exhibitions,  she has been a finalist in the Deakin University and the Woollahra  Small Sculpture Awards,  a  winner of the Meroogal Women’s Art Prize and is represented in the collections of the Universities of Melbourne and Wollongong.

She has has qualifications in secondary art education,  textile design and a MA in Australian Studies.