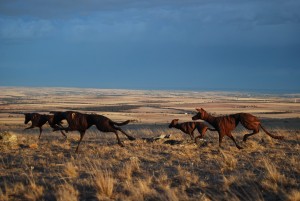 THE ARTIST
Presently a candidate for PhD in Visual Arts at the Australian National University, School of Art, my current sculptural practice researches the tense relations between wild dogs, dingoes and humans in the South East of Australia. Broadly, my visual art practice explores human relationships with the Australian natural environment, and has a particular focus on ―outsider‖ species. An earlier degree in land management and the natural sciences, enabled me to pursue my passion and work as a park ranger in various national parks and reserves in New South Wales and Tasmania. This profession gave me some rich experiences and insights observing firsthand the conflicts that can exist between humans and native or feral animals. Such observations were crucial in developing my fascination for species that are perceived as repugnant, dangerous or as vermin by humans.

These observations in turn fed directly into my art practice, both at conceptual and formal levels. Conceptually, they inform the research aspect of my work, which seeks to explore the tensions and complexities of shared environments and the multitude of attitudes, both overt and repressed, which arise when animals and non-human animals co-exist. In particular I am interested in the way some animals are revered, whilst others are reviled. Formally, my work is anchored in representational form, and I have a strong interest in materiality.

An early body of work developed for my Post Graduate research, entitled Mongrel Country – Nil Tenure, dealt specifically with tensions between farming communities and wild dogs and dingoes in south-eastern Australia. It manifested as a sculptural ―ghost pack‖ of forms derived proportionally from deceased wild canines in this region. This eerie pack, emaciated and restless, reflected sculpturally upon the ways that the farmer and the wild animal are  ̳bound‖ together – particularly when territories collide. Made from tannin soaked farmers‘ pyjamas and bed linens, they refer to sub-conscious relationships. They aim to promote dialogues which are informed by shared histories, and quietly meditate upon relations with country.

Since graduating from the ANU with a Bachelor of Visual Arts 1999 (1st class honours and University Medal-Sculpture Workshop), I have exhibited nationally and internationally. In 2009, I was honoured to be selected and exhibit in the inaugural Sculpture by the Sea, Denmark. I have taught and researched in various capacities with the Sculpture Workshop at the School of Art, Australian National University, since 2004.